My love affair with Chile continued today when I went on a field excursion to the Chilean Andes (Figure 1). I joined a group of delegates attending a conference on Hydrology on an outing to the San Pablo de Truega experimental watershed. The tour took us past some experimental stream gauges, designed to test the impact of forest thinning on stream flow. The site has two streams with monitoring gauges: a control stream in a relatively undisturbed natural forest stand and a treatment stream in a thinned forest stand. So far their results indicate that stream flow is vastly increased in the thinned site, primarily because fewer trees intercept rainwater and return less water to the atmosphere via transpiration, so more water ends up as run-off. Consequently results from this watershed are assisting foresters to manage the land, and also assist scientists in predicting future changes in water supply, an important ecosystem service.

The highlight of the trip for me was definitely our hike to El Presidente – the largest Nothofagus tree in the forest (Figure 2). On the hike I saw magnificent Saxagothea, Nothofagus and Laureliopsis trees, and a Darwin Frog (Rhinoderma darwinii)! This unusual little creature relies on camouflage to avoid being detected by predators, resembling a fallen leaf (Figure 2). Another interesting aspect about the frog is that the male Darwin’s frog protects the eggs for about three to four weeks. After the female lays the eggs in the leaf litter the male guards them until the developing tadpoles begin to move, and then he ingests the eggs and retains them in his vocal sac! The baby frogs hatch about three days later after which the male frog continues to carry them in his vocal sac until they hop out and disperse. Remarkable. 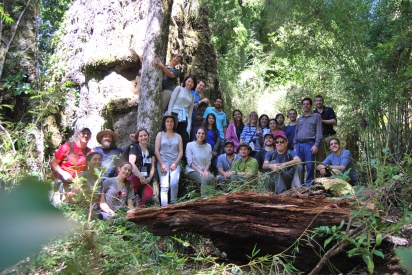 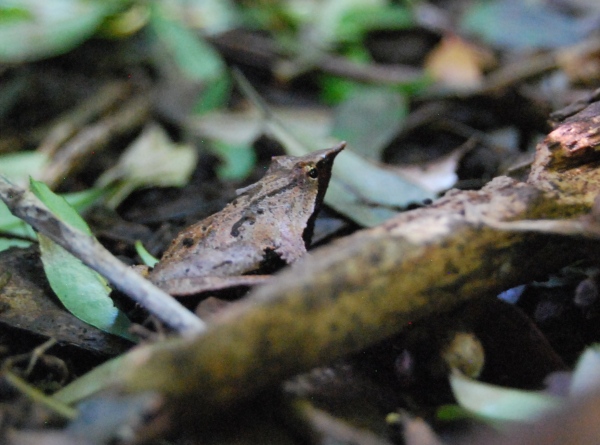 After the hike we had a traditional Chilean barbecue. It was excellent, and I was absolutely stuffed with delicious steak, potato salad and blood sausage. Needless to say that most of the tour group slept on the bus on the way home.

I was pleased that the Andes lived up to (and exceeded) my expectations, both in terms of the diversity of plants, but also the beauty of the forests. These ecosystems really are magnificent, and I very much hope to return to them one day.